When you write a Perl application with Mojolicious framework, you put tests into the t directory. Then it is very easy to run them because Mojolicious supports tests “out of the box” with test command that should run all tests one by one:

Also, for that you could create a Makefile:

And all works just fine: tests spawned with a familiar make test command.

I installed a trial copy of the latest ActiveState’s Komodo IDE and took it for a spin. That included testing as well. I found that Komodo tries to find a Makefile and runs the tests. Unfortunately, Komodo was not able to display the test results as it just spew an error messages **** Unrecognized input 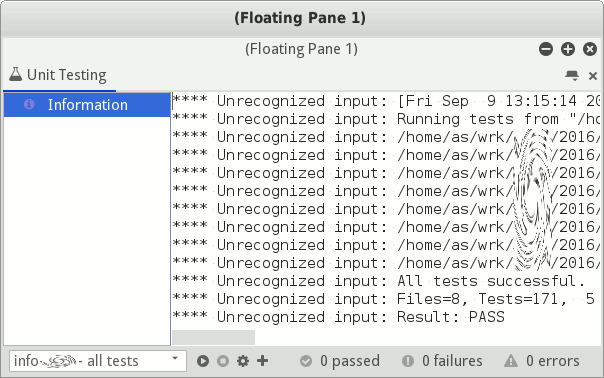 There is another way to execute tests: the prove command. It produced a similar output:

But there were some differences: debug messages were hidden and paths to files were relative instead of absolutes. It was enough for a clean outcome: